Skip to content
The sky may very well be the limit for one Kyle Lewis, but in order for him to reach his full potential, the swing-and-miss in his game needs to be held in check.

Ask most Mariners fans and you’ll be convinced that Kyle Lewis dominated the final month of the 2019 season. With a .263 batting average, .592 slugging percentage, six home runs, and 127 wRC+, Lewis blew the roof off T-Mobile Park in his limited 75 plate appearances.

Look a little closer, however, and you’ll find a meager on-base percentage of .293 and, more importantly, a 38.7% strikeout rate and 39.0% whiff rate.

This isn’t to say that Lewis’ debut wasn’t impressive, nor should it diminish the fact that it answered a few lingering questions, specifically with how his power may potentially play on the big stage. But the high strikeout numbers should be a cause to remain open-minded that Lewis may not be able to perform the encore some expect out of him in 2020.

The strikeouts came in bunches for Lewis pretty much right out of the gate, so these woes seem to be less of a product of a league-wide adjustment and more of an indication of an issue in his mechanics. Even at his hottest point of the month of September – his first 10 games – Lewis logged 16 of his 29 total strikeouts and was punched out in all but two of the 18 games he appeared in.

In college, Lewis only struckout at a ~16.03% clip, but the numbers began to climb in pro ball following his return from a gruesome knee injury in 2016. Lewis has never posted a strikeout rate below 21.1% in his professional career, reaching that career-low mark in 37 games at Double-A Arkansas in 2018; however, he then we on to follow that up with a concerning rate of 29.4% at the same level the next year.

So what seems to be the problem?

Now that Lewis has reached the MLB level, there is more data – albeit a small sample size – for someone like me to better assess the situation. Looking at Lewis’ swing/take splits, there isn’t a huge discrepancy in his plate discipline between he and the rest of the league.

Lewis didn’t chase an abnormal amount of pitches, nor did he let too many get by him in the zone. Of course, this is under the incredibly small umbrella of 75 plate appearances, so there’s only so much to glean from this, but Lewis seems to pretty much fall in line with league average.

This seems to be more of a timing issue and could be attributed to the growing pains of adjusting to the extraordinary speed and talent of Major League Baseball pitchers. 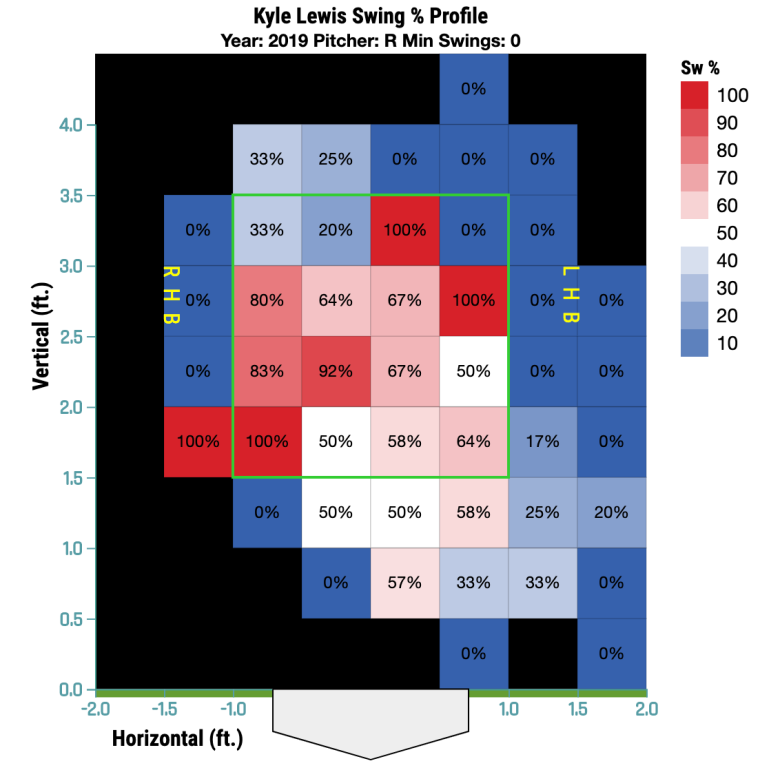 As the above illustrates, Lewis did most of his swinging on pitches inside the strike zone. Of the 72 hacks Lewis took on pitches in the zone, only 56 made contact, with 13 of his 16 whiffs resulting in a strikeout. Nine of those inside-the-zone strikeouts came on two- and four-seam fastballs, so Lewis is simply being overpowered here at times.

It isn’t news that Lewis struggles with his timing, however. As our friends at Lookout Landing pointed out amidst Lewis’ breakout September, the 24-year-old pumped the brakes on his busy hand motion at the plate that – paired with an aggressive leg kick – led to a ton of inconsistency in his swings.

Lewis now has a more static placement of his hands pre-pitch with the bat angled slightly over his right shoulder; however, as we’ve gone over, timing still remains to be an issue for him as the numbers continue to rise.

High strikeout numbers aren’t a death knell, however. Last year, the top three hitters in the league by slugging percentage all had strikeout rates north of 20%. But you have to make up the difference in other areas, and thankfully for Lewis, he did just that last year and has the talent to do so in the future.

Lewis can survive a high strikeout rate. Well, that is, as long as it doesn’t hover around 40.0% like it did in September. Of all qualified MLB hitters in 2019, the highest strikeout percentage in the league was 32.3%, ironically posted by then-Mariners outfielder Domingo Santana.

By the time the season is supposed to restart by July 22-24, Lewis will have turned 25 and appears to be all but guaranteed one of the Mariners’ three starting outfield spots with Mitch Haniger landing on the 45-day Injured List.

Despite being Jerry Dipoto’s first draft pick as Seattle’s general manager, Lewis’ importance to the Mariners’ rebuild is ultimately now in his hands rather than it being a deciding factor for the organization. Simply put; the Mariners will probably be fine if Lewis doesn’t pan out, but it would be a great bonus on top of all the work they’ve put into retooling their farm system if he does.

This is a big season for Kyle Lewis. With no apparent ‘face of the franchise’ on the current Mariners’ roster and the organization’s top two prospects still a ways off from making an impact at the Major League level, Lewis has the pedigree to establish himself as the first of hopefully many young stars for Seattle.